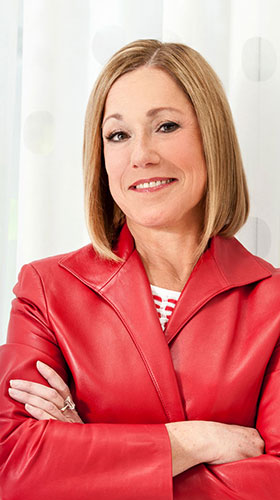 Charna E. Sherman is founder, sole shareholder and inspirational leader of Charna E. Sherman Law Offices Co., LPA. While based in Cleveland, Ohio, she recently has been admitted to the Florida Bar as well. Charna’s passions for the law and advancing diversity in the legal profession spurred her in 2010 to leave “BigLaw” to pursue a new model of a female-owned firm committed to promoting the core values of the profession. Inspired by a truly blind Lady Justice, this spirited boutique is focused on complex commercial litigation and the relentless resolution of client problems.

Charna’s “Principled Law” philosophy means being well-rounded, values-driven, tenacious, and passionate about the law and the legal profession — and then having the discipline and drive to bring all of it together for maximum client benefit.

Charna has made an indelible mark as a respected and accomplished litigator and trial lawyer, as well as a strategic negotiator in complex mediations and settlements. Most of her career over the last 35 years has been devoted to representing major clients, including Fortune 5 companies, in sensitive, high-stakes litigation. She has represented numerous individual and corporate clients as both plaintiffs and defendants in a broad range of cases in federal and state courts, gone to trial in civil and criminal jury cases, as well as commercial arbitrations, and effectively managed numerous multidistrict litigation matters, class actions and parallel proceedings. She recently concluded her service by appointment of U.S. Federal District Judge Dan Aaron Polster as Defense Liaison Counsel for major multidistrict litigation pending in the Northern District of Ohio. Charna is also a frequent speaker and media resource on the full spectrum of her professional activities, including offering media commentary on some of the country’s highest-profile white collar trials.

As of 1-1-11, Charna withdrew from the partnership of an Am Law 100 firm, where she co-chaired the corporate compliance, investigations and white collar defense practice. Previously, she was a partner at a top-ranked regional firm in Cleveland and also worked for Cleveland’s premier trial lawyer, Gerald Messerman. Before returning to her hometown of Cleveland in 1989, Charna was privileged to start her legal career at the renowned trial firm of Williams & Connolly LLP in Washington, D.C.

Right after law school, Charna was selected for a coveted clerkship with The Honorable John H. Pratt of the United States District Court for the District of Columbia. Before law school, she served as a legislative and personal assistant to U.S. Senator Daniel P. Moynihan and worked for esteemed Ohio Congressman Charles Vanik on the House Ways and Means Committee’s Subcommittee on International Trade.

In a still mostly male profession, Charna is also nationally and internationally recognized as a leading advocate on diversity in the legal profession. Passionate about the law, Charna is equally compassionate: initiating and supporting many philanthropic causes. Her latest philanthropic venture is the Ruby Shoes Fund, which she launched concurrently with the introduction of Charna E. Sherman Law Offices Co., LPA. The Ruby Shoes Fund supports new initiatives to empower women on the ladder of success, with a groundbreaking focus on strategies to help them overcome the unique challenges engendered - ironically - by their success.

More about Charna’s Road to Independence.