“Dear Evan Hansen opens up the hearts and minds of its characters, through both dialogue and song, to reveal their scars, their regrets, the true feelings buried beneath their public facades” 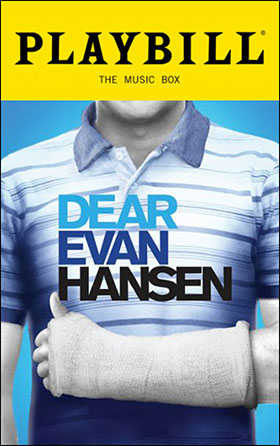 This inspiring and hip new musical starring Pitch Perfect's Ben Platt crosses generations. Opened at Arena State in Washington, DC on July 30, 2015 then headed to play Off-Broadway in the Spring of 2016. Opened on Broadway in December 2016.

Won 6 Tonys including Best Musical at the 71st annual Tony Awards, a Grammy Award for Best Musical Theater Album, and Best New Musical, Best Score (shared with orchestrator Alex Lacamoire) and Best Actor in a Musical for Sam Tutty at the 2020 Olivier Awards.

“Gorgeous heartbreaker of a musical…”

Washington Post Review: How 'Dear Evan Hansen' became one of the most remarkable shows in musical-theater history

* Denotes involvement other than as a producer.

Contact us to get more involved in Charna Productions.